Home › Who We Are › Our History

The organization’s original goals developed in 1939 continue to influence and inform our programs today. Those goals include:

Mental Health Minnesota was founded on May 8, 1939 as the Minnesota Mental Hygiene Society at a meeting in the Hotel Lowry of St. Paul. Within a year of formation, the Society had 170 members, collecting $456 in membership dues.

These early years focused on getting organized, bringing forth the Society’s articles of incorporation, bylaws, programs, and goals. The goals emphasized children’s mental health at first, bypassing a public education campaign due to costs and effectiveness doubts. Pursuing legislative changes consistent with the Society’s mission, members were successful in improving conditions in psychiatric state hospitals.

In 1950, the Society promoted Minnesota’s first Mental Health Week (April 23-29). That year also saw the formation of the National Association of Mental Health. In 1955, the organization became an affiliate member of NAMH, now Mental Health America.

By 1949, the Society collaborated closely with the newly-formed Citizens Mental Health Committee, started during the tenure of Governor Luther Youngdahl, a strong champion of mental health rights and treatment options in the state. The Society and the Committee merged in 1953 to form the precursor of the Mental Health Association of Minnesota (MHAM).

In 1956, the organization created a pioneering educational program for the business community, challenging Minnesota companies to address the issue of mental illnesses in the workplace, while a year later MHAM was instrumental in securing passage of the 1957 Community Mental Services Act, which established community mental health centers throughout Minnesota.

The organization’s membership grew from 500 in 1958 to 57,000 by 1965. In 1967, MHAM pushed for the first major overhaul of the state’s antiquated commitment procedures with the near-unanimous passage of the Hospitalization and Commitment Bill. In 1973, MHAM helped to establish a statutory right to treatment and a Patient’s Bill of Rights in the state hospital system.

In 1977, MHAM inaugurated REACH, a mutual support group for family members and friends of individuals with mental illnesses. The program design was to provide understanding and reassurance to each individual (thus, the acronym REACH). MHAM also released significant reports on shock therapy and psychosurgery to the public and media, which focused on the issue of informed consent.

In 1978, MHAM celebrated Mental Health Month with five Minnesota governors at a significant fundraiser and symposium. In 1983, MHAM was awarded a McKnight grant, which helped, in part, to establish the Law Advocates Network of trained advocates available to help current or former psychiatric patients. In 1986, mental health advocacy and education came to northern Minnesota with the opening of the Duluth office.

MHAM offered a federally funded program— the Depression/Awareness, Recognition and Treatment (D/ART) Program—from the late 1980s through the late 1990s, which emphasized the treating of depression before it led to a crisis.

In 1987 and 1989, MHAM successfully lobbied to gain the passage of the Adult and Children’s Mental Health acts, while 1995 saw the passage of Minnesota’s landmark Insurance Parity Law and 1997 the Patient Protection Act.

MHAM also began working toward a formal merger with the Minnesota Depressive and Manic Depressive Association.

Bringing Us to Today…1999 to Present

Remembrance and Recovery was published in 2005. This book was the result of writing workshops offered to individuals living with mental illnesses. Through the workshops, individuals learned how to tell their stories of recovery in their own words. The book provides hope to those living with a mental illness and a greater understanding about recovery for others.

MHAM moved into the digital age by providing resources on its website and continually finding ways to connect to those in need of advocacy and support. The organization has also built a presence on social media, working to promote hope and recovery.

In 2015, MHAM acquired a new service, the Minnesota Warmline, which provides peer-to-peer phone support to people working on their mental health recovery. In 2017, the Warmline added texting to the service. The Minnesota Warmline now takes more than 12,000 calls every year, helping people to stay well and avoid crisis.

MHAM also changed its name and tagline in 2015, to Mental Health Minnesota: The Voice of Recovery. A Mental Health Ambassador network was also started to spread the message of hope, wellness and recovery across Minnesota, and now has more than 400 members!

Learn More About the History of Mental Health Minnesota 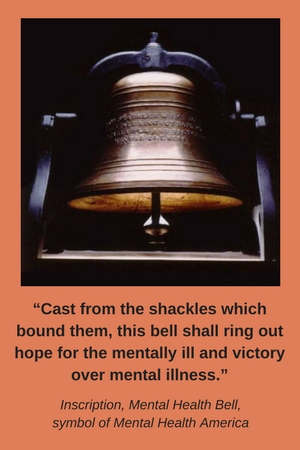 Donate
Our programs depend on the generosity of our donors.