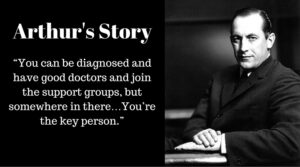 We at Mental Health Minnesota are very excited for our upcoming Recovery Conference on May 20 — with the theme of living a life of recovery from mental illness. As we were preparing for the conference last week, we received word that our long-time supporter Arthur Anselmo had passed away. Arthur truly demonstrated a life of successful recovery, and we wanted you to know his important story.

Arthur was born in Hibbing, Minn., in 1926, the son of Italian immigrants Pietro and Erminia Anselmo. After graduating from Hibbing High School in 1944, Arthur served a brief stint in the U.S. Army Air Corps before attending college at St. Thomas University in Saint Paul. He followed his undergraduate study with a law degree from Marquette University in Milwaukee, WI, before returning to Hibbing, where he became the village attorney. He was elected as a special municipal judge in 1952 at the age of 26.

Arthur was known for his judicial prowess, and at age 34, Arthur became a Judge in Minnesota’s Sixth Judicial District; at the time he was the youngest person to ever have served in this position. He had a very bright political future, with many speculating he would go to the Minnesota Supreme Court or the US Senate.

However, he was also known for excess. Though his first bout with depression came on just a few months after he was appointed, in general he was able to manage his rollercoaster swings for six years. However, the stress of commuting between Duluth and the Twin Cities (where he was piloting a juvenile court judge program), as well as his heavy case load, exacerbated the situation. Anselmo became known for his mania, including gunning his Porsche at 140mph over Duluth’s aerial bridge at 4am. Finally, he resigned his judgeship, and entered the darkest period of his life. His parents both died; he divorced; he was briefly institutionalized.

Arthur spent the next several years trying to wrest his life back from his illness as he learned to manage the drastic swings between mania and depression. Basically jobless and homeless, at a time when mental illness often meant long-term institutionalization, Arthur crafted his own successful recovery with the help of advocates, including Mental Health Minnesota.

He went on to a second successful career, serving twenty years as the Assistant Minnesota Attorney General in Duluth. In 1986, Governor Rudy Perpich appointed him Commissioner of Bocce Ball.

In his retirement, Arthur became a mental health advocate, serving on the boards of several mental health organizations and sharing his experience with bipolar disorder. He even made a brief appearance on the Oprah Winfrey show to share his experiences of despair and recovery.

The important thing about Arthur’s life of recovery was that it was not one simple thing that turned a switch and solved it. Over the years, he suffered many more manic-depressive incidences. He was known for excess during those times, including extravagant purchases and even an impulsive marriage. But those times also made him dig deeper to come back to the bases of recovery, especially his family. His two sons helped him with that, and his son Dario has taken over the reins in becoming a strong advocate for mental health issues.

It was never easy, but to Arthur, it was always worth it. As he said in a 1993 interview with the Duluth News-Tribune “You can be diagnosed and have good doctors and join the support groups, but somewhere in there…You’re the key person.”

Arthur’s life of recovery allowed him to enjoy wonderful time with his family, including his sons and grandchildren. He is also survived by Lynda Anselmo and countless friends. His last weekend was a weekend of storytelling and family time, before he passed away on April 26, just two weeks short of his 90th birthday — still in recovery, and still making it happen.