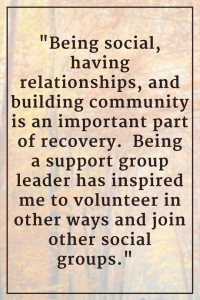 Could you tell us a little bit about yourself, and what led you to begin volunteering as a support group leader?

I am a Traumatic Brain Injury (TBI) survivor. I had the umbilical cord wrapped around my neck 66 years ago when I was born, and I have dealt with the resulting brain injury all of my life. As an adult, I began to experience depression related to my TBI. I was in counseling for both my depression and brain injury, and my mental health provider suggested that I start attending support groups in addition to therapy.

In 1997, I began attending a Depression and Bipolar Support Alliance (DBSA) group in St. Louis Park. The facilitators of the group, Bobby and Sue, began to train some of the group members to become facilitators as well.

After I completed the trainings, I began filling in as the facilitator for the St. Louis Park group that I attended, and then I became one of the lead facilitators of a new DBSA support group in St. Paul.

Wow, so you have been a support group leader for quite some time!

Yes, for just about 20 years – I started facilitating St. Paul DBSA group in the late 90s.

What do you think peer-to-peer support groups contribute to a person’s recovery? What is unique about the peer-to-peer model?

Well, a peer-led support group means that there are no professionals, such as psychiatrists or therapists, involved. During peer-to-peer support groups, we do not focus on giving advice. We just share our own personal experiences, and can relate to each other because we often experience similar symptoms. Even if members of the group do not have the same diagnosis, we can often relate to each other’s symptoms. For example, I can often relate to people who have experienced memory loss due to medication or ECT, because I experience memory loss from my brain injury.

We honor each person as an individual, are non-judgmental, do not analyze symptoms, and only give feedback or advice if a person specifically asks us. We are not trying to provide treatment, but rather to share what we are going through, and connect with each other on a personal level.

We also sometimes share resources that we have found to be helpful such as the Minnesota Warmline, county crisis lines, homelessness resources, and 211.

Has leading a support group contributed to your own recovery journey?

I would say yes, it has. It has helped me become an active member of my community and allowed me to give back to my community. Being social, having relationships, and building community is an important part of recovery. Being a support group leader has inspired me to volunteer in other ways and join other social groups.

I used to volunteer at the Humane Society combing cats. There is also a website called meetup.com that has given me all kinds of ideas for joining different groups. Through meetup.com, I joined a card club and a diabetes support group. I am also part of a brain injury support group.

The St. Paul DBSA support group has also led to other social meet ups. A member from the group started a “share and get out of the house” group that meets at Caribou Coffee in the evenings and people just sit and talk with each other. It’s a place to be together when the group doesn’t meet.

What advice do you have for someone who is thinking about starting a support group in their community?

I would suggest attending an existing support group or attending multiple support groups, just to get some experience watching how the other facilitators operate the groups. It is also important to attend support groups just to gain an understanding of how they work, and how each group’s guidelines work. When you start your own support group, establish the purpose of the group and outline the guidelines.

Mental Health Minnesota offers support group facilitator training if you are interested in starting a support group in your community.

Apply to volunteer as a support group leader here!